It's highly unfortunate that I don't post my photos until about 4 months after the food has been consumed, digested, and recycled back to the earth and atmosphere, because I have such a terrible track record for writing down recipes (umm, I don't), and I have long forgotten what goes into each delicious dish. Not very helpful to you, the viewer. Still, I thought I'd get a few of these (poorly lit) out of my backlog box, in hopes that it will create the vacuum necessary to get my slackin' fanny back into the kitchen, creating and documenting a new slew of terrific disasters.

This here is some of the best stuffed zucchini I've ever shoved in my spit-hole in my life!
It's hard to tell from the yellowness of the photo what-all went into it, but I'll try to make a few edumacated guesses: onions, corn, sundried tomatoes, bread crumbs, oregano, a layer of red pepper/cashew "cheese", and a couple of other veggies that have slipped my mind. Not a pretty picture, but you can pretend to salivate anyway. 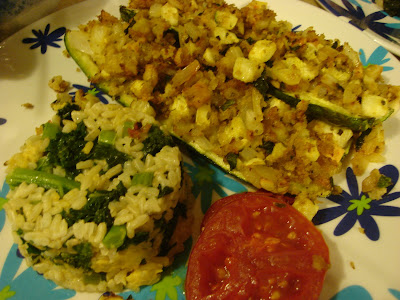 This is one of my favorite dishes from Rosetta's Kitchen in Asheville, NC, an awesome vegetarian/vegan soul food spot that's open long after the bars close. It's called peanut butter tofu, and it's one of those things that you either love or you despise (like cilantro)...I have to have it every once in a while, and more often than I make it up to Asheville. Basically, you cube and freeze some extra-firm tofu, thaw it, then toss it with a mixture of peanut butter, shoyu, miso paste, olive oil, and little bit of sweetener. Their recipe calls for sugar, but you can easily substitute maple syrup. Bake it in the oven for about 30 minutes, until everything gets brown and a little crunchy. I like to serve it with a mess o' spicy greens, and here I've made blue corn crepes and threw in some sliced avocadoes. 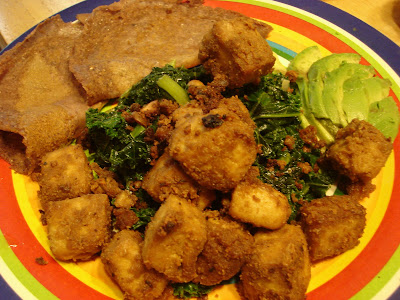 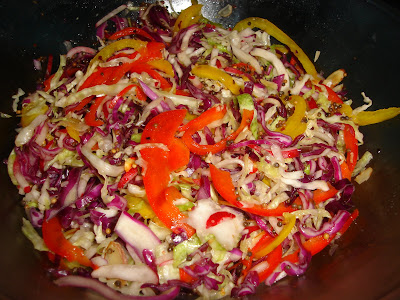 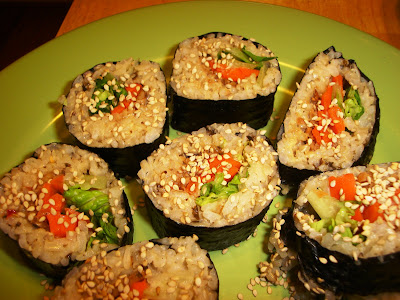 Raw vegan lasagne kicks all kinds of summertime ass!
Layers of zucchini, yellow squash, spinach, sundried tomato sauce, cashew "cheese" (pinenuts work well, too), portobellas, a walnut meaty layer---and I mean that in a Bible sense, as in "I give ye these nuts and fruits and seeds as your meat"---, and of course(!) a nice slathering of pesto sauce. Add any other thinly sliced veggies you like, wrap it and let it sit a few hours, then slice and gobble up (and watch your carcass-eating friends have embarrassing orgasmic attacks and beg for more). 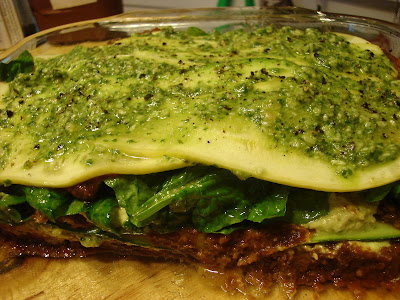 This one looks good, but it's too bad I don't remember the flava-rings. Potatoes, tofu, daikon, squash, and orrechiete over lettuce? I wonder what it tasted like... 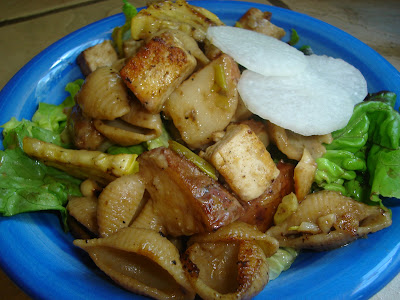 Well, that's all I've got time for today, folks. Cross your fingles and maybe I'll be back!

...can really help you get through the day. Especially when life is not making a whole lot of sense, but you know you can divine something from the murkiness of it all, if you just look deeply enough, or abstractly enough.

Itʼs quackshuns like this that give my razz a twittle
And thereʼs nought left to droom but google P. Diddle
For the wisenack oft blooms when snorching hubriskly
Instorgation desmacks one upon blacker he kissed me.

Well, it seems I have not only fooled you, the public, but I have fooled myself into thinking this blogging would be a great medium for me to share all of my most profound, intellectual thoughts on food, consumption and consumerism, the earth, environmentalism, greater imperialsim (within the whole animal kingdom), love and hate, compassion vs. tolerance, recipes, the importance of clarity in speech, yada yada yada... because, apparently, I have entered a simpleton era, where I have exchanged deep thought for deep sleep, coffee and writing for wine and dumbbells, mind-opening documentaries for mind-numbing "romantic comedies", and my red bug for my red bike (see photos below!). However, now that my good friend e-mile-high has begun her own blog, I feel pressured into proving that I am more than just a web page with sexy photos! She's so much cooler than me at everything else, and now she's outted her hidden skills once again (like, witty on paper as well as in person. I also found out earlier this year that she's got a bit of a baking-gene up her sleeve...I never knew) 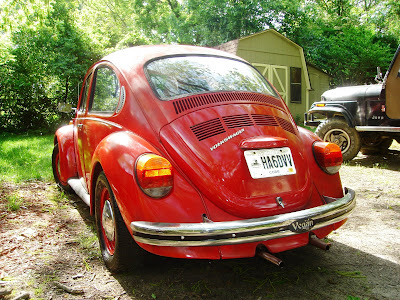 Anyway, the awful truth is, post-tirade, I've still got not much to say. So I'm thinking about taking questions. I may even have to develop an entirely new webpage with a built-in forum or ask/answer session, then scurry out of bed in the wee of the night (uh, usually the wee-wee of the night), before the glory of morning dumbs me down again, and give you my exalted philosophy on all the intricacies and abnormalities of life. Seriously, folks, right now, 5:30 in the afternoon, all I can come up with is 42. And this ziti/asparagus/pesto salad. 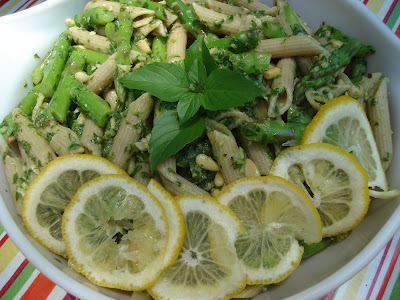 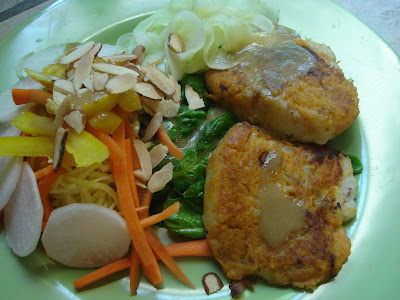 grilled veggie lavash roll. well, what did you think it was?? 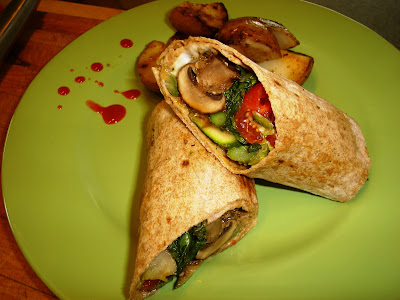 I don't know. a sallet of some sort. with peanut lime dressing. yes indeedy 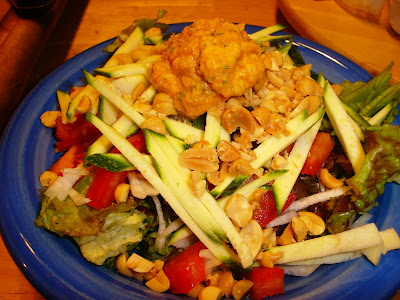 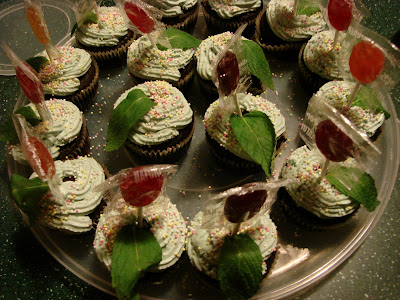 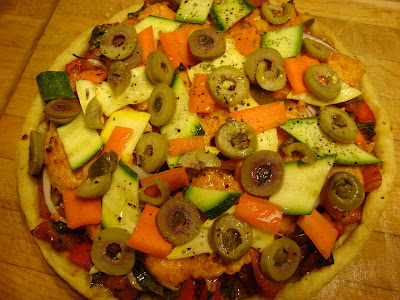 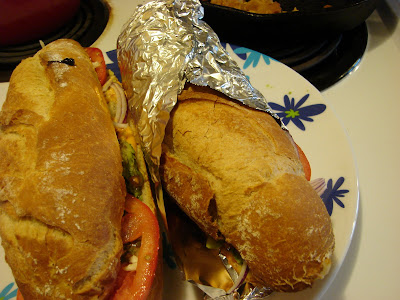 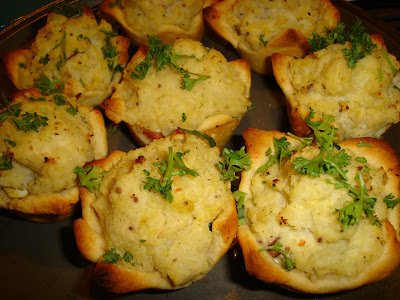 A veggie pot pie with lots of cauliflower. I forgot to get a photo with the top crust on. 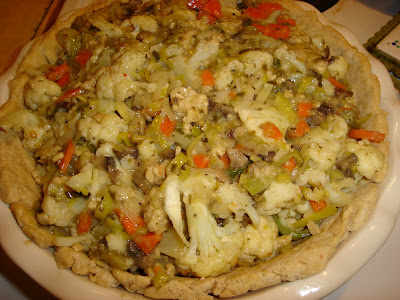 what are YOU lookin at? 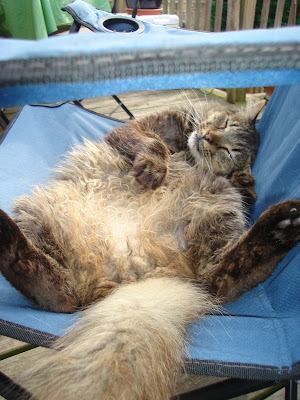 none of these guys are Waldo. 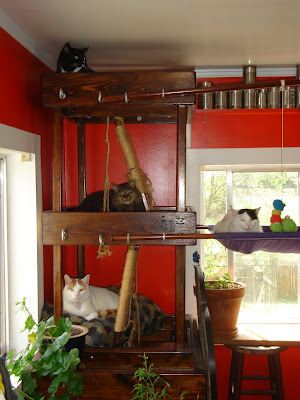 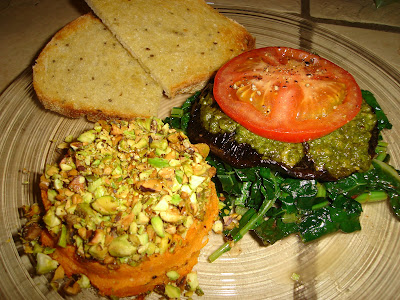 another versian of the above, but with beer-batter crepes and blackened tofu.
I want this for dinner RIGHT NOW. 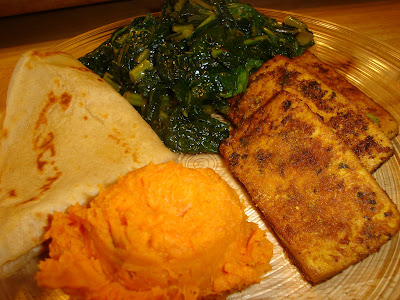 Was that insightful enough for you?????
Posted by natalilly at 7:59 PM 1 comment:

natalilly
Norfolk, VA, United States
She lifted her arms and she floated away... I'm an animal lovin', huggin', kissin' vegan who loves food almost as much as I love my clowder of cats, so it's a good thing I know my way around the kitchen! Currently, I am trying to find a way to procure an income via indulging myself in foodplay. However, until I am rich and famous, I have plenty of time to f*ck around on the computer posting pictures and thoughts on these fabulous food fabrications (and hopefully inspire fellow eaters).

Some other blogs I think take the eggless cake:

fotos for the hell of it 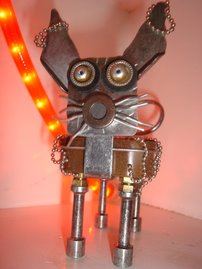 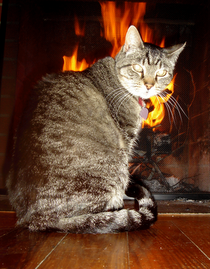 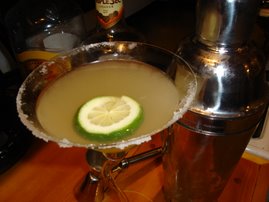 have a mexican martini on me! 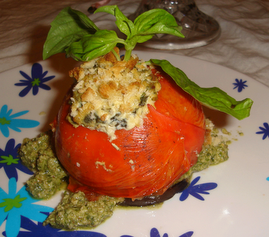 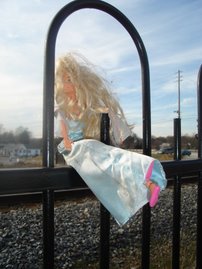 hangin out by the tracks